The Heyward Family Association regards its family as the descendants of Daniel Heyward, one of the earliest immigrants to what is now the state of South Carolina.

Daniel Heyward was born about 1640 in Derbyshire, England. He’s known to have been in Charles Towne (now Charleston) in 1672, but it’s not known for sure how or why he came there. He had four children in America and died in September, 1684. His wife, whose name we don’t know, is assumed to have predeceased him.

Only one of Daniel Heyward’s children lived to reproduce. That child, a son whose life was short, had only one child. And that descendant, the immigrant’s grandson Thomas Heyward (1700 – 1737), became a fairly prosperous merchant and farmer in the Charleston area. He fathered seven children. Two of them achieved remarkable success as rice planters, establishing a dynasty that lasted over a hundred years. Those two great-grandsons of the immigrant are Daniel Heyward (1720 – 1777) and Thomas Heyward (1723 – 1795). Today all living Heyward family members have one of these men as ancestors.

The descendant tree below diagrams the first five generations of the Heyward family. Nine of the immigrant’s great-great grandchildren have lines of descent that continue into the twenty-first century. By family convention, the fifth-generation Heyward descendants are said to head nine branches of the family, “A” through “I.” All were connected with the rice-planting culture in the South Carolina low country.

The Fifth Generation and Beyond

The wealth acquired by the immigrant’s two great-grandsons in colonial times put their descendants into the elite society and culture of the rice planters. The rice plantations were ten or more miles inland from the Atlantic coastline of South Carolina and Georgia. Foreign demand for their product was strong and most of the rice was exported to Europe.

The South Carolina Heywards owned dozens of plantations, mostly in the region between Charleston and Savannah. It was not uncommon for a planter in that area to maintain a family residence on one of his plantations and another in Charleston, Beaufort or Savannah. The rice-planting families had few social equals in that era and tended to marry among themselves, creating what has been called a “vast cousinage.”

Civil War destruction and the emancipation of slaves–without compensation to their owners–destroyed the wealth of the rice planters and ended their unique elite culture. After the war a few Heyward planters managed to borrow money to resume planting, but ultimately, in the mid-1890’s, the rice industry succumbed to problems of devastating hurricanes, labor unrest and competition from the western states and from abroad. The rice fields fell into ruin and vast tracts of land were sold off to phosphate mining companies and to wealthy northerners for use as hunting preserves. The Heyward descendants of the rice planters moved on to farming other crops or to other lines of work. Many moved away from the coastal region, or away from the state of South Carolina or away from the South altogether.

James Barnwell Heyward II (1848 – 1931), a great-grandson of Nathaniel Heyward (C-branch), took a somewhat obsessive interest in his family’s history and genealogy and published two works based on his research. The first, published in 1907, was The Colonial History of the Heyward Family of South Carolina, 1670 – 1770. In this 38-page booklet he examined the wills of the Heyward pioneers and built the Heyward descendant tree up to Generation 6. His second work, published posthumously, is titled Heyward and is called “The Red Book” by family members today. It brings the descendant tree of the immigrant Daniel Heyward up to the early twentieth century. It also contains family lore, biographical information and a large number of pictures of the Heyward descendants and their spouses.

James Barnwell Heyward III (1891 -1966), a Columbia lawyer (and first-cousin-once-removed to James Barmwell Heyward II, mentioned above), wrote two articles for the South Carolina Historical Magazine on “The Heyward Family of South Carolina.” His 1958 articles documented the early Heyward genealogy as part of a series about South Carolina families of historical importance.

In 1996 James Bolan Glover V documented many generations of Heyward E-branch descendants in his book Colonel Joseph Glover (1719-1783) and His Descendants, Thirteen Generations of the Glover Family. Colonel Joseph Glover of the title was the father-in-law of Margaret Heyward (1753 – 1837), head of the Heyward family E-branch and great-great granddaughter of Daniel Heyward, the immigrant.

In 2000 Rev. Frederick Wallace Pyne published Volume 7 of his series Descendants of the Signers of the Declaration of Independence, documenting the descendants of signers from North Carolina, South Carolina and Georgia. Included are descendants of Thomas Heyward (1746 – 1809), head of the Heyward family’s A-branch and great-great grandson of Daniel Heyward, the immigrant. Members of the Heyward Family Association are credited with supplying Rev. Pyne considerable material for this book.

In the 1990’s Thomas DeSaussure Furman (1915 – 2008), genealogist for the Heyward Family Association, collected family data from living descendants and extended the immigrant’s descendant tree into the tenth, eleventh, twelfth and thirteenth generations. In 2003 he published a 200-page book entitled Ancestors and Descendants of Nathaniel Heyward (1766 – 1851)/South Carolina Rice Planter that focused on the C-branch Heywards.

Tom Furman prepared more than twenty paper charts, each about 3-feet by 4-feet, that diagrammed the ancestral connection of living family members to Daniel Heyward, the immigrant. Photos below show Tom Furman and his charts at a Heyward family reunion, where his charts were always popular. 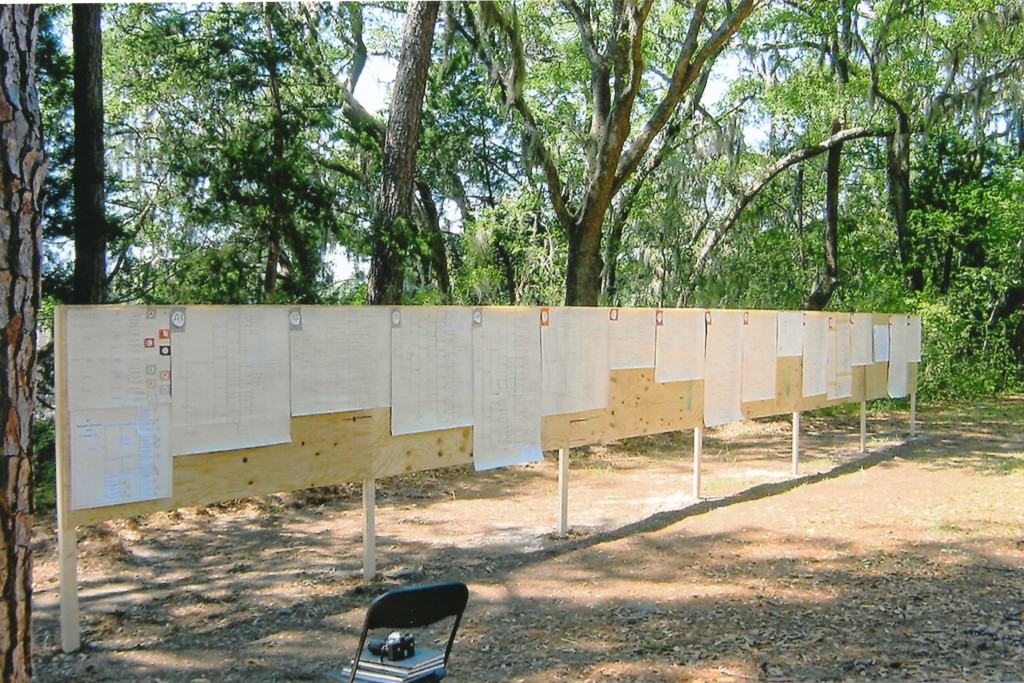 Tom Furman’s skills at putting detailed line drawings on large sheets of paper (he was a professor of civil engineering) are no longer with us and his charts are ragged, faded and, in some cases, unreadable due to rain damage. Fortunately, computer software developed in the last decade makes it possible to organize and present genealogical data graphically and to make that data accessible via the Internet. This modern day capability is utilized in the Heyward family genealogical database, accessible from this website. Click here to find out more about the database.